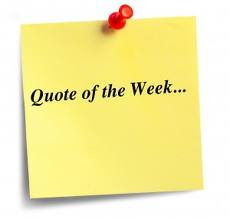 On Fridays I will post a Lean related Quote. Throughout our lifetimes many people touch our lives and leave us with words of wisdom. These can both be a source of new learning and also a point to pause and reflect upon lessons we have learned. Within Lean active learning is an important aspect on this journey because without learning we can not improve.

"To be doing good deeds is man's most glorious task."   —  Sophocles

It is important to always show kindness to others and be grateful to the ones who showed us compassion. The story “A Glass of Milk” is a great way to teach this important life lesson that we can enjoy.

In a small town, there lived a poor boy who grew up selling newspapers house to house. He used to make enough money to finance his educational expenses.

He was travelling from home to home, like every day, delivering newspapers even when he felt sick and hungry. He felt he couldn't continue much longer. He was so famished that he proceeded to go to one of the houses and ask for food.

When he knocked at the door, he was surprised to see a lovely young lady answer it. He asked the girl for a drink of water after much deliberation. The young lady saw the boy's predicament and offered him a jug of milk.

The boy gulped the milk and thanked the kind-hearted girl with a surprised expression.

"What do I pay you for this milk?" the boy inquired.

"I'm not looking for any compensation for all of this," the girl said softly. The kid greeted the girl again and again from the bottom of his heart and walked away.

Several years had gone by. The young girl was a grown woman. Tragically, the young woman was identified with a very rare form of neurological disorder. She was hospitalised at the best hospital as her health became more critical by the day.

Kevin, a well-known doctor, was available in that hospital. The physicians at the hospital had asked him in specifically to check her. Despite his exceptional expertise, Dr Kevin found the girl's ailment to be extremely difficult to cure.

He was, nevertheless, able to treat her sickness after much perseverance and hard work. The girl was finally cured of the condition after diligent therapy and observation.

All of the doctors complimented him on his dedication. The girl, on the other hand, was concerned about the hospital bill cost.

Her family had just a small sum of money in the bank, which was insufficient to cover the cost of therapy and treatment. Once the girl eventually received the hospital bill, she was taken aback. She accepted the bill with trembling hands.

She was shocked to discover that the bill had been struck out and cancelled and that behind the bill was a message written by Dr Kevin. The letter read, "Bill paid years ago with a glass of milk!"

This story teaches us the importance of good deeds. The story is a perfect example that one good deed leads to another. It was because the young girl from years ago helped a little boy that she received kindness when she needed it the most. The story also teaches us the important lesson on gratefulness. Since the little boy felt gratitude towards the girl he remembered her all through the years and worked hard to become a diligent doctor.